With its 1000x data traffic capacity-enhancing ability over 4G, the promise of 5G technology is set to herald a whole new era in wireless communications. Beyond delivering a richer and ubiquitous immersive multimedia experience, it is going to transform communication and control for industrial and automotive applications. The self-driving-car revolution is poised to use 5G as its central pillar. With an entirely new class of Internet of Things (IoT) devices using distributed wireless sensing and shared artificial intelligence (AI), it has already started harnessing the power of 5G. The true potential of 5G wireless technology is limited only by one’s imagination. Its scope is truly boundless. And, behind its far-reaching abilities lies the hidden complexities of wireless technology for which the MIPI RF Front End Control Interface (MIPI RFFE℠) specification is a key enabler.

There is hardly anything more fundamental to 5G than the RF front end (RFFE) control architecture. Any video data, any app data—literally anything that is being transmitted or received wirelessly relies on RFFE for control of the RF front-end module (FEM) or subsystem, consisting of all of the power amplifiers, antenna tuners, filters, low-noise amplifiers (LNAs), switches, etc. that link to the modem baseband and/or RF integrated circuit (RFIC) transceiver.

Since its launch in 2010, MIPI RFFE has come to replace generations of proprietary, often point-to-point separate interfaces to front-end components, thus simplifying the design, configuration and integration of the increasingly complex RF front end. In developing version 3.0 of the interface, which is scheduled for release in April 2020, the MIPI RF Front-End Control Working Group intentionally streamlined and optimized the protocol and stayed laser focused on enabling manufacturers to take maximum advantage of today’s real-world opportunities in the unfolding 5G era.

All About the Triggers

5G is bringing about an explosion in the number of RF bands involved in both uplink and downlink communications—and, in turn, shrinkage in the subcarrier spacing (SCS) window between RF packets. Another evolving requirement is to meet ever-shorter latencies for switching between various bands and band combinations. This situation is also impacted by the fact that, traditionally, RFFE was deployed primarily in mobile handsets, but the control requirements around wireless communications are expanding to automotive, the IoT and other use cases with the introduction of 5G. In this light, development of MIPI RFFE v3.0 is driven by the need to enable those use cases beyond mobile and meet the unprecedented requirements for tighter timing precision and reduced latencies that are defined in the 3GPP 5G standard today.

To meet 5G’s need for dynamic configuration changes achieved within a much shorter time window, the forthcoming v3.0 delivers several enhancements to the interface’s trigger features and functionality. A variety of triggers are used to give the RF subsystem the ability to configure multiple RF devices with very tight timing control and synchronize changes in register settings within a slave device, and across multiple devices: 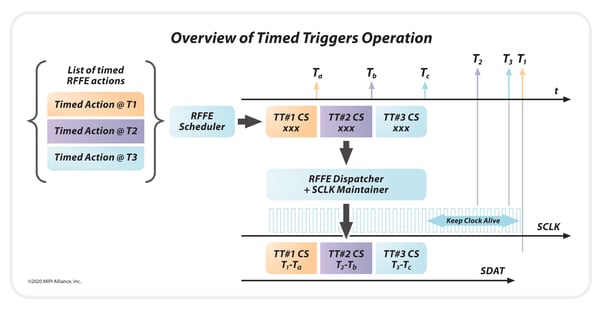 The triggers work together to swiftly configure and flexibly reconfigure the RF front end for all of 5G’s expanding range of bands. For back-to-back trigger operations, for example, MIPI RFFE v3.0 delivers a 20x improvement in the precision of timing. In this way, the new version of the specification is designed to improve throughput efficiencies and reduce packet latency and errors to help ensure 5G devices can provide the high-performance RF capabilities at the core of critical consumer and business features.

Furthermore, the flexibility conveyed in v3.0 allows a system to be designed with a reduced number of RFFE buses on an RF board. The interface’s mappable triggers enable the dynamic remapping to trigger assignments to address the increased number of uplink and downlink carrier aggregation combinations with the ever-increasing number of possible RF bands. The channel is optimized, increasing the utilization of devices. Plus, with all of the control combined within one bus, pins are conserved on the master baseband transceiver. It is possible that software may also be simplified, with a fewer number of disparate RFFE buses to coordinate across. Cost savings are realized across the board.

The realization of 5G is a process, and we are only in its very early stages. The features to be delivered in MIPI RFFE v3.0 are intended to enable RF system designers to capitalize on the first main rollout of 5G—the Frequency Range 1 (FR1) of traditional sub-6 GHz cellular bands. In enabling fast, agile, semi-automated and comprehensive control of various individual RFFE sub-systems, v3.0 delivers the features that the mainstream RF marketplace requires to thrive in today’s 5G rollout. And because v3.0 is backwards compatible with prior RFFE versions, no changes in the physical layer of MIPI RFFE are necessary for system designers to cope with.

This is a key attribute because RFFE is a widely relied-upon specification with a large ecosystem of adopters and devices already in the market. Indeed, RFFE has emerged as the clear workhorse of the RF industry. Back in 2008, when the MIPI RF Front-End Control Working Group started its work, devices utilized multiple methods for managing the front end. RF technology is no longer fragmented, however, thanks to convergence around MIPI RFFE over the last decade as the de facto standard.

The working group is constantly looking at adding new features that will further differentiate and benefit the user community. In fact, work has already begun on development of a next-generation RFFE specification to support time-stringent RF front-end control needs for 5G’s massive MIMO (multiple input, multiple output), 5G NR (new radio) FR2 (Frequency Range 2) operating in millimeter wave (24.25 GHz to 56 GHz) bands and the next stages of global, ongoing 5G rollout. Now is the time to become involved in the requirements-gathering phase of the next-generation MIPI RFFE targeted for FR2. At the same time, those interested in participating in the continuing evolution of the current RFFE specification are welcome to join the RFFE working group.