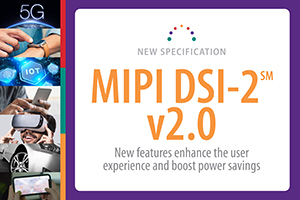 A 17 August MIPI Alliance press release explains how the new features in DSI-2 v2.0 enable displays to seamlessly and efficiently operate in a variety of use cases—from high-resolution, high-frame-rate video modes (such as 8K with 120 fps), to responsive, low-latency graphical user interface “command” modes, and static modes—for dramatically improved display performance at the lowest possible power consumption. The new version can also deliver more than 6 gigapixels per second of uncompressed image content, based on coupling with the latest versions of MIPI C-PHY and D-PHY.

The key features that the MIPI Display Working Group built into DSI-2 v2.0 deliver ever-more immersive experiences, as well as increased power savings, resulting in an enhanced experience for the user. These features include: