Written by: Sharmion Kerley, MIPI Director of Marketing and Membership
7 May 2020
×

5G uplink and downlink communications demand significantly more radio frequency (RF) bands, and, in turn, the subcarrier spacing (SCS) windows among RF packets are significantly tighter. That translates to unprecedented requirements for tight timing precision and low latency. Development of the MIPI RF Front End Control Interface (MIPI RFFESM) v3.0 has been keenly focused on meeting this challenge and aligning to precisely where evolution of the 3GPP 5G standard has progressed today.

Almost every device with cellular connectivity—handsets, smartwatches, automobiles—already leverages MIPI RFFE. The specification has been deployed in billions of devices since its debut in 2010; undeniably, it has emerged as the de facto global standard interface for control of RF front-end (FE) subsystems.

A recent press release details the newest version of MIPI RFFE and how it is designed to deliver exactly the features and functionality that manufacturers need today to enable the next wave of critical consumer and business features across 5G’s exploding range of application spaces. The press release also takes a peek at what’s next for the MIPI RF Front End Control Working Group and invites engagement in the next round of innovation for the specification.

Read the full RFFE v3.0 announcement here as well as a recent blog written by the working group’s chair and vice chairs. MIPI is also hosting a webinar, “A New MIPI RFFE for the Emerging 5G Era,” on 2 June 2020, at 11 am EDT, 8 a.m. PDT.

Learn more and register for the upcoming webinar >> 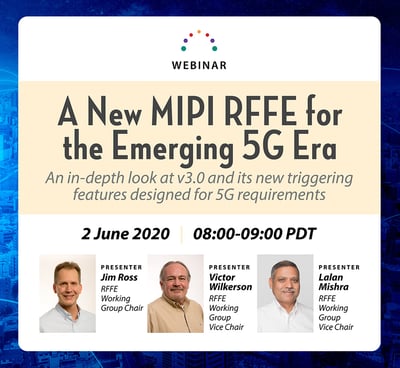