MIPI I3C: Spurring Innovation in Sensor Integration and Beyond 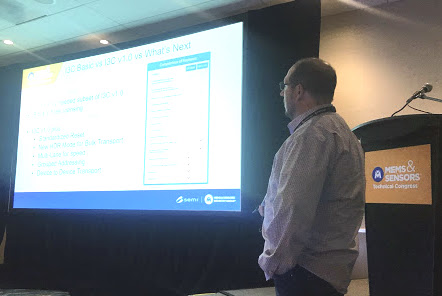 At SEMI’s Flexible Hybrid Electronics (FLEX) and MEMS & Sensors Technical Congress (MSTC) conference last month in Monterey, Calif., much of the buzz surrounded the astonishing projected growth in the demand for sensors in virtually everything, from such seemingly diverse applications as autonomous driving systems to large-scale crop moisture management.

But regardless of whether these sensors will be targeted for wearables, industrial applications, automotive applications or agriculture, integration is key. And, anywhere sensors are used, MIPI I3C® offers the ability to simplify the integration process, reducing costs and speeding time to market. With this in mind, Ken Foust, sensor technologist at Intel, and chair of both the MIPI Sensor and I3C Basic Ad Hoc working groups, was invited to provide an update on MIPI I3C advancements since the specification was released to MIPI members in 2016.

The Continuing Evolution of MIPI I3C

Foust’s presentation, “Motivations for MIPI I3C, Its Impact and Where It’s Going,” took attendees on a journey through the evolution of MIPI I3C − from how it was initially developed to provide an upgrade path from the aged but ubiquitous I2C, to how it has become a catalyst for innovation within and beyond MIPI Alliance, quickly finding new applications beyond its original mission. 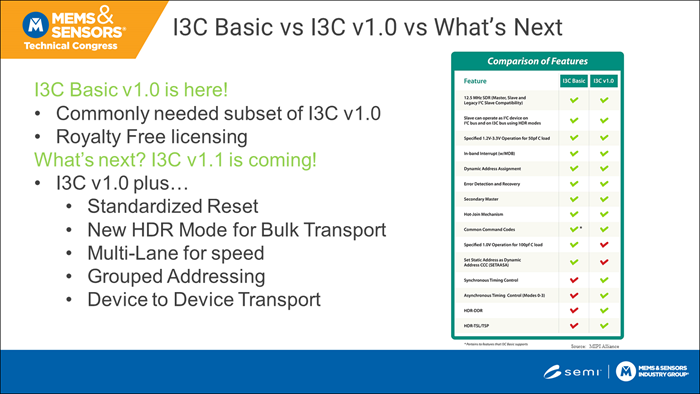 Momentum for I3C has shown no signs of slowing, as plugfests in Europe, Asia and North America have confirmed MIPI I3C’s interoperability, while test and analysis equipment has become widely accessible, and master and slave IP can now be obtained from many providers. Developers are further aided by the inclusion of the I3C subsystem in the Linux kernel, along with the upcoming Discovery and Configuration Specification for I3C (MIPI DisCo for I3CSM ), which will define a set of properties applicable to MIPI I3C host controllers, masters and slaves (also anticipated to be available in summer 2019). In addition to these efforts, several standards organizations are actively working with MIPI Alliance to explore the potential adoption of I3C in complementary standards.

Today, innovation on MIPI I3C is realizing tangible benefits well beyond sensor integration. For instance, the MIPI TouchSM family of specifications (released in 2018) incorporated I3C, while the upcoming update to the MIPI Camera Command Set and the introduction of MIPI Debug for I3CSM will offer new capabilities and benefits for developers of both camera and debug applications (see Figure 2). Figure 3 shows how MIPI I3C can also be used for system manageability. 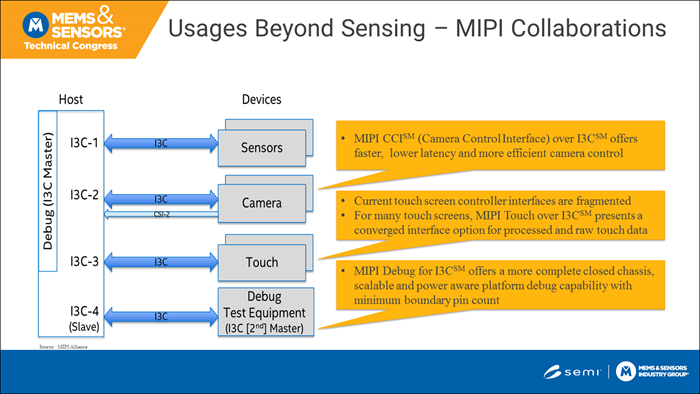 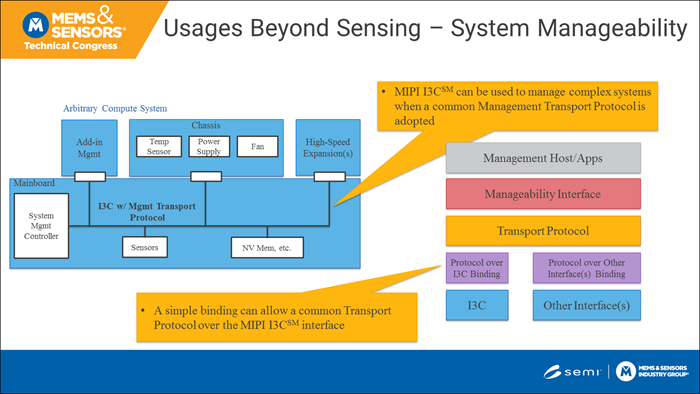 MIPI I3C can also play a key role in automotive. The forecast demand for AD/ADAS sensors (cameras, radar and lidar) is expected to reach 110.5 million units in 2021 and then 490 million units by 2030. Not only can MIPI I3C provide an alternative to existing I2C implementations, but it also offers strong potential for use in sensor data transport, and control and manageability.

“The MEMS and Sensors Industry Group was a key collaborator during I3C’s initial development,” Foust said, “so the conference was an opportunity to reconnect with the community and share our progress since then. With the release of I3C Basic and the other development work underway, the momentum is in place to work with others to further innovation, and greatly expand and support the I3C ecosystem.”

The MIPI Sensor Working Group welcomes interest from both companies and other standards organizations to ensure that MIPI I3C continues to evolve to meet the needs of the broader industry. If interested, visit mipi.org to learn more about MIPI I3C, the Sensor Working Group and membership in MIPI Alliance.