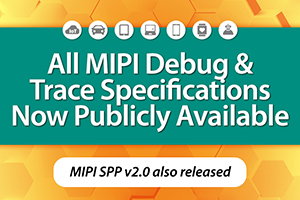 Now developers, regardless of company membership in MIPI Alliance, can take advantage of these benefits: All MIPI debug and trace specifications have been made publicly available for download. We're taking this step to foster greater interoperability and a richer development environment. MIPI Alliance’s software specifications, which help to streamline the software integration of components in mobile devices and other systems, are also publicly available.

In conjunction with the public release of the specifications, we're introducing a new version of SneakPeek to help developers debug small devices such as sensors. The new version, MIPI SPP v2.0, includes TinySPP, a style of the protocol that is optimized for low-bandwidth and potentially high-latency interfaces.

TinySPP will especially benefit developers using MIPI I3C®, the high-performance, low-power interface for links between sensors and application processors. In fact, development is underway for MIPI Debug for I3CSM that will expand applications of the MIPI I3C interface into testing and debugging.
TinySPP includes features that reduce the data transfer and overhead requirements for debug and test communications, which will allow for efficient debugging of small, low-powered devices in the Internet of Things.

MIPI SPP v2.0 is available for download along with the other debug and trace specifications. Companies that would like to contribute to the development of new specifications like SPP v2.0 can join MIPI Alliance and enjoy other benefits, including participation in interoperability workshops and other events.