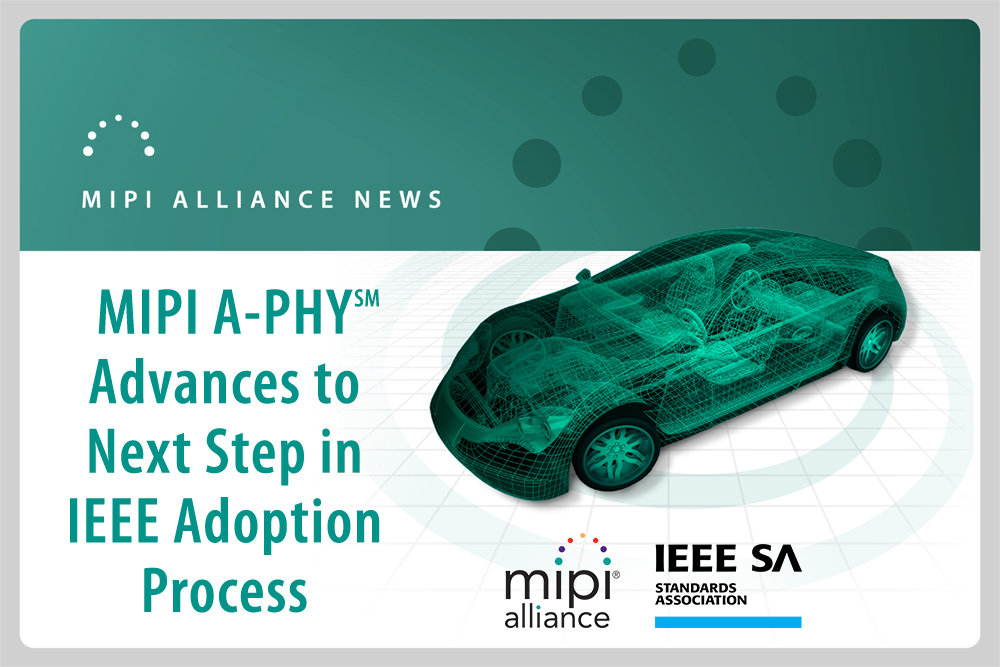 MIPI A-PHY℠ v1.0 has now crossed an important milestone on its path toward adoption as an IEEE standard.

The approval of the PAR clears the way for the creation of the IEEE P2977 A-PHY Adoption Working Group. The group is chaired by Rick Wietfeldt, Qualcomm Incorporated, with Tzahi Madgar of Valens Semiconductor serving as vice chair. Additional organizations sponsoring the PAR and participating in the working group include Intel Corporation, the University of New Hampshire InterOperability Laboratory (UNH-IoL) and MIPI Alliance.

With a reach of up to 15 meters, MIPI A-PHY offers high-speed performance with an ultra-low packet error rate of 10‑19 for unprecedented reliability, ultra-high immunity to electromagnetic interference effects, and data rate as high as 16 Gbps, with a roadmap to 48 Gbps and beyond.

In October 2020, MIPI Alliance announced the signing of a memorandum of understanding with IEEE to facilitate the adoption process for MIPI A-PHY v1.0 within IEEE. IEEE is the world's largest technical professional organization dedicated to advancing technology for the benefit of humanity. It has more than 419,000 members in over 160 countries across a wide range of technology spaces.

The collaboration is intended to bring MIPI A-PHY to a broader ecosystem beyond MIPI’s membership, which in turn will foster greater interoperability, choice and economies of scale for the global automotive industry. For IEEE, the contribution of MIPI A-PHY will add a new asymmetric approach to its existing portfolio of IEEE automotive standards.

It is important to note that ongoing development of the A-PHY specification will remain with MIPI Alliance.

With this initiative, MIPI Alliance also joined the IEEE SA as a corporate member and is a participant in its IEEE SA Industry Affiliate Network (IAN).

The A-PHY Adoption Working Group will hold its inaugural meeting on Tuesday, 9 March, 8-11 a.m. PST, and MIPI member companies that are also IEEE SA Advanced Corporate Members are invited to participate in the group. More information can be found on the group's webpage.

The IEEE adoption process for A-PHY is expected to be complete by the end of 2021.

For more information or questions about the MIPI-IEEE collaboration, please contact me via email.